Stacey Baca is an American Anchor/Reporter currently working for ABC 7 Chicago since joining the station in June 2002.

Stacey Baca is an American anchor/reporter working for ABC 7 Chicago serving as a reporter as well as an anchor. She has been working for the station since June 2002. Her last day at the station will be 26 June 2022. 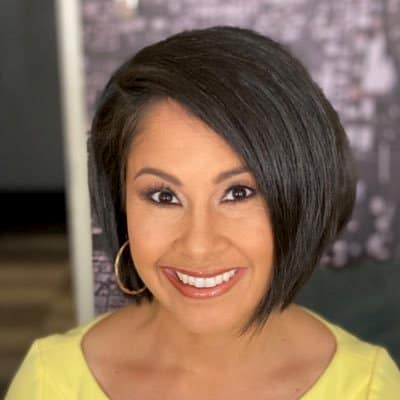 Born and raised in Brighton, Colorado, Baca attended and graduated from the University of Colorado at Boulder. She is passionate about education and often speaks to elementary, middle and high school, and college students.

Baca anchors, reports, and stays connected through Twitter and Facebook, especially on ABC 7 Weekends – Saturday and Sunday 5-7 a.m. & 8-10 a.m. She also covers a wide range of stories including breaking news, education, crime, politics, and feature stories, among others. She contributes to the afternoon newscasts and frequently reports on ABC 7 News at 10.

Baca also has a passion for covering military news throughout the Chicago area. This is somehow personal because Baca is married to a retired naval aviator and has been involved in military life for more than 20 years. Because of her husband’s military career, she has worked coast to coast.

Before joining ABC 7 News, Baca anchored and reported at KNSD in San Diego from 1999 to 2002. While in California, Baca covered everything from the military, crime, politics, and courts, to international border issues between the U.S. and Mexico. Additionally, she traveled overseas to cover the 2000 Olympics in Sydney, Australia. Prior to California, Baca worked in Norfolk, Virginia-home of the country’s largest Navy base- anchoring as well as reporting the Saturday and Sunday morning newscasts at WTKR-TV from 1996 to 1998.

Before starting her journalism career, Baca worked with newspapers. In her hometown of Brighton, Colorado, she worked for the Brighton Standard Blade while she was attending the University. After graduating, she was hired by The Denver Post Baca as a staff writer from 1992 to 1996. She detailed how HIV/AIDS was affecting the Latino community and uncovered information about the local militia movements.

Throughout her career, she has also won and been recognized with numerous awards from the Associated Press and the National Academy of Television Arts & Sciences (NATAS). Baca is as well a member of NATAS and the National Association of Hispanic Journalists.

Bacastands at an approximate height of 5 feet 5 inches.

Information regarding Baca’s parents and siblings is currently under review. However, the information will be updated as soon as it’s available. When she is not working, Baca loves biking, hiking, rollerblading, and traveling. She is also fond of old vehicles and owns a smokin’ 1956 Ford F-100 pickup.

Baca is married to Toddy Gilchrist who is a retired Navy veteran. They tied the knot on January 28, 1997, and together the couple has been blessed with three children whose names she has not mentioned. She resides in Chicago, Illinois together with her family.

Baca has an estimated net worth of between $1 million – $5 Million which she has earned through her successful career as an Anchor/Reporter.

Baca publicized that she would be leaving ABC7 on 26 June 2022. She will leave the station after working for the station for about 20 years. She stated, “the hardest career decision of my life,” Baca, 53, told viewers she was leaving to spend more time with her husband, retired naval aviator Todd Gilchrist. “We are not guaranteed tomorrow, my friends,” she said.

At ABC7 Chicago Baca works alongside;